On P101 test realm Marleybone, Aquila, the Bazaar, Second Chance Chests, Transportalors, a new tutorial, and tons more! I can't wait to try Marleybone out and Aquila and see some of the fantastic items at the Bazaar!

Adventures await ye in the highly anticipated release of Books 13 and 14 in Pirate101! With the introduction of both the war-torn skyway of Marleybone and the legendary beauty and danger found throughout Aquila, high-level pirates will now continue their rebel journey against the evil Armada! All characters who have finished the quest "The Great and Powerful Turtle" in MooShu must now visit Avery in his office to continue their adventures with the quest "That Darn Cat" (You'll know you have completed this if you own the "Enlightened One" Badge in your list of badges).We hope you’re impressed as the amount of content being released is almost double what would normally be released in an expansion, and as such, players will now be able to level their characters from 50 to 65 (both regular and nautical level)! With new levels comes increased power for players: Remember to visit your trainers often, since beginning at level 52 and every 2 to 3 levels afterwards, you’ll unlock new talents or powers for your character. Speaking of power, tons of new weapons and gear await you in both worlds, and even the mini-games will return better rewards for higher level players. There’s new ship equipment waiting for you as well—TIME TO SUMMON THE KRAKEN! Worried about the cost of these new power ups? Don’t be! Your available gold cap has been increased to 200,000 gold.

New Companions abound--additional companions await your discovery, Pirates, and many of your old companions will discover new powers and tiers of promotion available to them. You’ll need the additional power since your journey won’t be without danger—with greater reward comes greater challenges! Prepare yourself to battle with and against a host of new faces: Kurghas, Grenadiers, Anarchists, War Golems, Vultures, Manticores, Ophidians, Eagle Centurions, Ettins, Trolls, Sirens, Minotaurs, Krakens, Crokagators, and Gorgons await you! The fun definitely doesn’t stop there as a lot of effort has been done to bring our players everything from new ambient creatures, NPCs performing daily activities in several towns and battle props to additional treasure chests and training tomes in hidden locations. And if that isn’t enough, Zeke is back with new exploration quests! 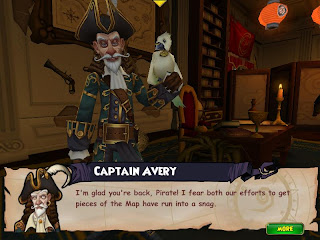 Starting the quest on Test realms


More coming soon!
Posted by The adventure of the spiral at 1:18 PM No comments:

Hey guys it's me Blaze DragonHorn (Brave Blaze Silver) I haven't posted anything in over four months! Devastation struck in my family and I just couldn't get on my computer, but I miss blogging, tweeting etc.

I am going to try to start blogging and play 101 again and talk to you guys more often. I can't wait to start playing Pirate101 and Wizard101 and blog on my adventure through the Spiral

Soon I am going to start some contests and events (hopefully) with my pal and partner David.