The crew went out to chase enemy Devullio when he kidnapped Sir George the 8th. The crew found Devullio on Cooper's Roost skyway. Devullio took care of Sanchi's ship, causing them to crash on Cooper Roost. When everyone is knocked out, Sanchez is told about El Toro and he sent Sanchi to find El Toro, challenge him and defeat him, but Kane heard the news and send Deacon and an army to Cooper's Roost.

"Are we close to our destination, sir?" Armada Officer said
"Are we at Cooper's Roost, yet?" Deacon said
"No sir" Armada officer said
Deacon brought plenty of armadas with him. He brought five officers, three elite armada snipers, two armada marksman and the commander, Drogic (who's helping Deacon).
"Then we're not close" Deacon said
"Deacon, with all respect...don't treat my troops like that...please" Drogic said
"Really?" Deacon said, "Drogic, you're a clockwork AND you're not Kane...Rooke or I"
Deacon's only priority is to get Sanchi's crew and defeat Devullio, but he didn't know where Devullio was.
"Also Drogic" Deacon said, "We aren't in Cooper's Roost skyway yet...so that's a hint"
"We'll get these individuals and kill them" Drogic said

"How are we gonna get out of here?" Julia said
"Well our devices are gone...because of that crash" Sanchi said, "Plus...this is our mission to get to Cool Ranch to help the people"
It was just Sanchi and Julia in the room, resting. Sanchez already informed him about Cooper's Roost and El Toro and Sanchi wanted him as bad as Sanchez. Chun didn't have a care anymore, his only concern was finding Shiruku and getting off this place and back to Skull island.
"Listen" Sanchez said, "Let Sanchi speak"
Sanchi gathered everyone in his crew, Boris, Chun, Julia, Shiruku, Dorugh, Sanchez and even the deputy to discuss on El Toro.
"I'm going out to search for this masked hero...I'll find him" Sanchi said, "Shiruku is coming with me...I'm gonna need help, so you guys stay with the deputy and help him out"
Sanchi ended the discussion and Shiruku went with him. Meanwhile, everyone else stayed back.

Sanchi and Shiruku started to search around Cooper's Roost. With no ship, they're hoping to find him here. Sanchi was determined, while Shiruku was worried. If she goes back to Skull island, Juhn and Avery would have her executed.
"Do you remember anything?" Sanchi asked
"Only watching your friend get a sword through his chest" Shiruku said, "What was his name?"
Sanchi was upset that her memory was gone. He remembered the wreck, he remembered Devon. What really upset Sanchi, that she didn't remember Moresco.
"His name? Anthony De Sharp" Sanchi said
"Handsome young man...I'm sorry that Devullio did that to you guys" Shiruku said
"Payback is gonna be worse for him" Sanchi said
Sanchi and Shiruku reached a strange building. Roof had holes in it, no door and the windows were broken. That was Sanchi's first clue. There was a sign though, it was "Merryweather Clark"
Sanchi brought out his sword and Shiruku brought out both of her knifes and they went inside.
"Woah" Shiruku said, "Filthy!"
The inside was worst then the outside. Wallpaper was peeling off, floors...there was none and it was filled with rats. Sanchi started to smell an awful smell and notice flies were everywhere, but the flies helped. He started to walk towards the door with flies trying to get through.
"What's in there?" Shiruku said
Sanchi slowly opened the door and the smell got worst. He peeked and started to throw up.
"What's in there?" Shiruku said, backing up.
Sanchi just gave Shiruku a disgusting look and ran out of the rest, still throwing up and Shiruku followed behind.

"How long have you been a deputy?" Dorugh asked, sitting on his desk.
"Well... two years" Deputy Randal said, "Sadly, I've dealt with armadas alot"
Dorugh shook his head, agreeing with deputy. He felt his pain. Losing Dez, Anthony and Moresco was extremely painful for everyone, mainly Sanchez.
"Have you ever lost anyone you loved?" Dorugh said, "Brother, mother...even friend?"
Randal started to speak, but than he hesitated. He started to take a sip of his drink and leaned back in his chair, "Armada army, led by Kane...they came here...they...they killed my girlfriend and wiped out my whole entire family"
Deputy Randal is a chicken deputy. With an eye patch over his left eye and two pistols on his side. Dorugh knew that Randal was struggling to keep this town safe.
"Well..."
Dorugh stopped as he heard gunshots. Quickly Deputy got up and looked out of the window. It was Deacon and many armadas behind him.
"Deacon!" Deputy Randal cried, "He's here!"
Dorugh quickly dropped to the ground. Thoughts were going through his mind, wondering if he'll live or die, but most importantly...his crew. Dorugh got up and ran through the back door to get his crew.
"Sanchez" Dorugh whispered, finding him first, "Deacon...they're here!"
Sanchez didn't know what to say, noticing Randal was behind Dorugh with both of his guns out and ready.
"Get Chun, Boris and Julia" Dorugh said, pulling his pistols out.
"No! Find them and get them to a safe spot...now!" Sanchez said, "Deputy, stay with me"
Dorugh quietly ran to Quinn's place. Meanwhile, Sanchez and Randal tried to discuss a plan, but they couldn't think of one.
"Drogic" Deacon said, "Place some of the snipers on the roofs"
Drogic sent three of his elite armada snipers on rooftops. Citizens started to hide in their house, but Deacon knew where they was. Suddenly, armadas started to break in houses, holding the citizens hostage and stole their belongings.
"Keep the folks alive" Deacon said, "We're gonna take them as slaves"

"Are you sure that this masked hero is even here?" Shiruku asked
Sanchi didn't answer Shiruku. He just kept on looking around Cooper's Roost, but then he stopped.
"Why'd you stop?" Shiruku said, putting her's knifes up.
Sanchi saw a strange cave, with roses around the entrance, crushed ones. He pulled his sword out again and started to walk towards the cave and Shiruku followed behind.
"Hello? Anybody in here?" Sanchi said, hearing footsteps
Boom! The masked hero jumped out, pushing Shiruku out of her way. Wanting to duel Sanchi. El Toro with a black mask over his eyes, black hat on his head and his horns on his head and his cape blowing from the wind. Sanchi knew he was a Swashbuckler.
"How dare you" El Toro said, "Coming into my home!"
Shiruku quickly got back up, behind El Toro. Not knowing that the great masked hero felt her behind him.
"Stay back, little girl" El Toro said, "This masked man wants a duel"
El Toro made the first move. He swung his skinny sword at Sanchi, but luckily Sanchi dodged his moves and got behind him. Without thinking, Sanchi went for his legs. Pulling his sword back, El Toro quickly dodged his hit and they both faced each other.
"I like the way you use that sword" El Toro said, running towards him.
Cling, cling, cling. El Toro and Sanchi went back at it again, going deeper in his cave, passing torches. Sanchi swung his sword at El Toro's head, but he dropped to the ground, kicking Sanchi's leg. Sanchi fell back on the ground. El Toro pointed his sword at Sanchi, laughing at him.
"Silent one!" El Toro said, "Not one word from your's lost"
El Toro made a mistake and that was making Sanchi angry. He quickly kicked him in his private part, causing him to drop his sword and Sanchi had his laugh.
"Unfair move!" El Toro said, "I like that!"
"I'm not here to make you look like a fool" Sanchi said, "I want you to join my crew"
El Toro didn't get up, still in pain from Sanchi's move. He just started to laugh.
"Well...you've defeated me" El Toro said, finally got up.
El Toro started to smile at Sanchi and brought out his hand, for Sanchi to shake and he did.
"I am the great El Toro!" he said, "What's your name?"
"Sanchi...MY companion sitting down is Shiruku" Sanchi said
Shiruku gave Sanchi a mad look. She couldn't believe that's what Sanchi think of her, an useless companion. El Toro didn't care, but he had thoughts about Sanchi. Once it was done, Sanchi walked out of El Toro's cave, stepping on his roses and the rest followed Sanchi.
"I can't believe you called me a companion" Shiruku whispered, getting away from El Toro.
Sanchi gave Shiruku a strange look, "That's what you are...From Skull island to here"
"I don't remember any of my past...besides Bishop and all this! Plus I'll never be your companion!" Shiruku said
Then, Sanchi stopped. Putting his arm in front of Shiruku. He was furious at Shiruku, but El Toro liked this argument. He was interested about them talking about their past.
"After we got off Cooper's Roost you are gone!" Sanchi said, pushing Shiruku down.
Shiruku wouldn't take Sanchi's abuse. She quickly got up while Sanchi was walking away with El Toro and pulled one of her knifes out. Then, she ran towards Sanchi screaming at him and stabbed him in his shoulder.
"What's wrong with you!" Sanchi said, slapping Shiruku, "You're crazy!"
With his anger, Sanchi pulled out his sword and swung at Shiruku, but he missed. Scared, Shriuku got up and ran from him, after pulling her knife out.
"Let's get back to my crew" Sanchi said 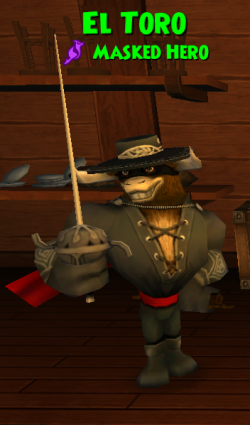 Posted by The adventure of the spiral at 9:10 PM